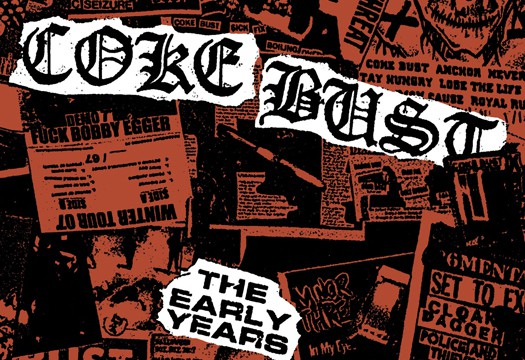 After finishing the Japanese tour version of the early Coke Bust catalog, I went to work on the regular version. I had an idea of making a massive collage of flyers, record covers and miscellaneous dumb shit that someway or another ties in with Coke Bust’s history. Nick Tape helped me out with stuff from his archives, my buddy Micke supplied the original Dischord EPs, and in the end I just put it all on my dinner table and had my friend Björn take a photography. The latter part was harder than I had anticipated as Björn had to hold is camera still with arms stretched forward and upward.  The lighting became uneven and I had to spend ages editing part my part of the photography to make each part as visible as possible within the restraints of the style I was going for (sort of blown up photocopy style). Can you spot the stool pills? The broken kick-drum skin on the back cover is from the 2010 Edge Day show in Gothenburg, where I first met the band. I’ve kept it as a souvenir.

Alex D of Grave Mistake Records acted as a mentor in terms of how to use tiny photos taken from an old myspace page and make them usable on a full size inner-sleeve. Much respect! To tie things together I re-used the same DC triple X logo that I drew and used for the design of the ”Live on WMUC” 7″.

The a side label features the original bass player of the band, Parsons, along with the one and only JU to the B, aka Billy’s Friend. 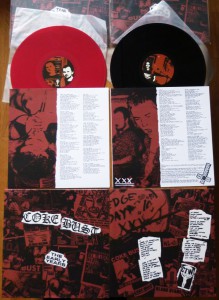 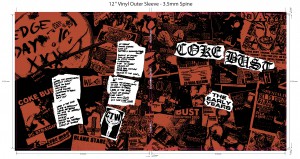 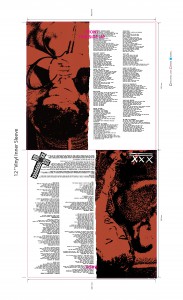 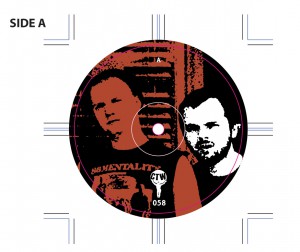 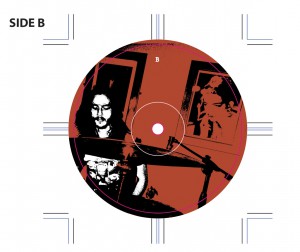