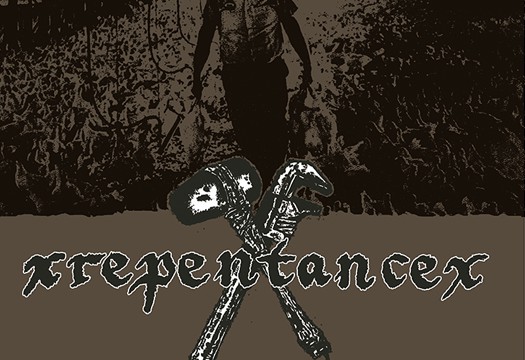 I was once again given the chance to work on something for xRepentancex and Carry The Weight Records, and as before with this combination of band and label, the budget allowed for a fun format. This time I played around with a gate-fold seven inch (my first design of one of these). I wanted to connect with previous designs for the band (by me and others), while still coming up with something new. The tools logo on the front has been used before by them, but I considered it to be too ”clean” and/or computerized, so I drew a new version with brush and acrylic paint. Even though it is quite small on the cover, I still think it was a good idea, and it also goes well with the rough around the edges band logo I painted with the same means a few years ago. I added a thin white border around the band name to allow me to have two different dark tones with the logo still being visible and readable. The photos on the front and back covers were taken from these amazing books with year chronicles in photos that I buy at flee markets whenever I find them. For the inside of the gate-fold I painted a monkey tied to a horrible vivisection device and put it in the background of the lyrics. I had tons of sick photos of the band to work with, primarily from Carry The Weight Fest in 2015, and chose one that I love by Call Me Killer. The only thing I am not too pleased with overall is the A side label, which I think became too stuffed with objects. I should have skipped the tools logo. The 7″ is already sold out, but a double LP discography is on its way. There is also an Australian version on Life Lair Regret that I am currently waiting on receiving, so this post will be updated with that one later, plus a shirt design and a skate deck (!). 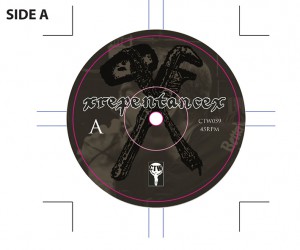 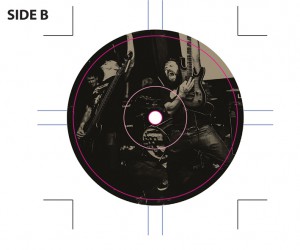 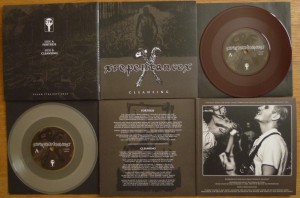