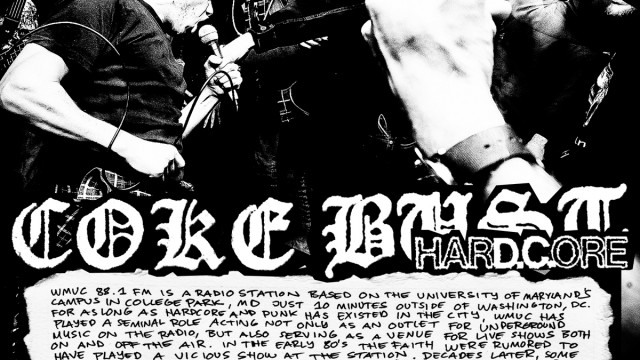 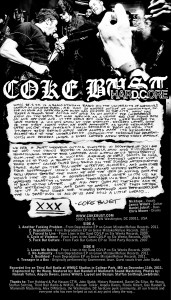 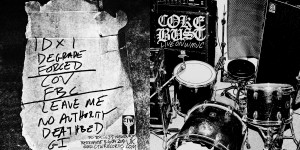 My US buddies in Coke Bust did a live set for WMUC, and my UK lads from Carry The Weight Records released it on vinyl. Perfect match for me. I received some photos, including Nick Tape’s handwritten set list. ”IDx1” is actually ”Another Fucking Problem” from the ”Degradation” EP. Nick told me sometime why that song is always written like that on set lists, but I forgot what it was about.

The front cover is a picture from their former practice space. I added the logo on the speaker, and the title in my own handwriting.

The (one-sided) inlay definitely demanded the most time and attention. Nick wanted A LOT of information on a small space. I decided to hand-write his whole story about the recording, making it look like an ”authentic” letter. It wasn’t easy getting all the specifics about the songs etc in there without compromising style, but I think I got it down pretty good in the end.

The a side label is the most funny thing with the whole design, in my opinion. This EP was released in 2012, which happened to be the last year the football (ie soccer for Americans) team I support played on our beloved stadium Råsunda, before it got torn down. As a tribute to that, I put a picture of its 1930s construction on the label. ”What the hell is that?” Pat from CTW asked me. I don’t think I gave him a straight answer.

The b side label has Chris Moore from the recording at WMUC, in a Masshysteri shirt.