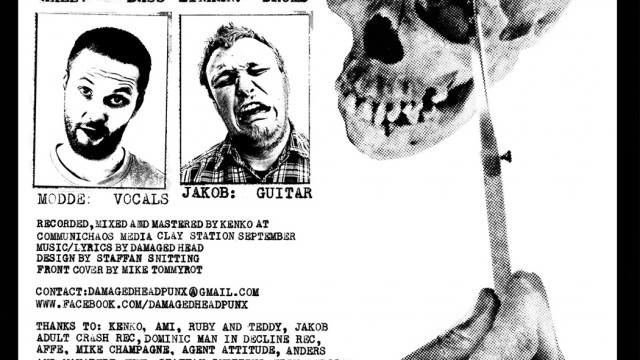 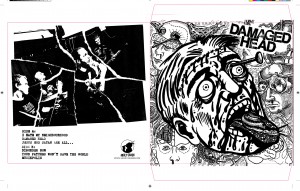 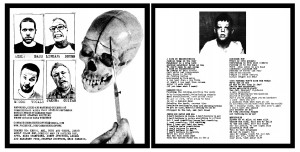 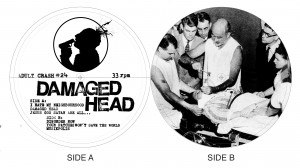 Damaged Head is a band from Uppsala and Stockholm featuring members of bands like Nitad, Herätys, Agent Attitude, Forced Into and a lot more. Adult Crash picked them up directly and the band’s first release is this EP on the Danish label, which has also been released as a one-sided 12″ in the US on Man In Decline Records. I had the honor of doing the design for both.

This design took a lot of time to get together. I am extremely thankful that Mike Tommyrot from Syracuse of Black SS fame (he drew the cover of the second Path Of Resistance cover!) agreed to draw the front cover, not only because it turned out better than I had expected, but also because it allowed me to focus on the rest of it. I typed all the lyrics and credits on a type writer and then spent hours and hours editing it, finding new ways to combine lines and work with margins. At first, we had a silly idea that all members would be presented on fake psych ward registration cards, but it was hard to make it look good and I am thankful the idea was scrapped. Sometimes you have to invest x amount of hours into a bad idea before you can actually move forward and create something you’re happy with. And I am happy with this one. Much of the images deal with lobotomy: the front cover, the b side label picture, the boy on top of the lyrics and the big hand and skull beside the credits. I like how that theme worked out so well.

I later did the Damaged Head LP, also on Adult Crash and Man In Decline, for which I re-used the concept of a torn photo, as on the back cover here.